When faced with a medical emergency involving critical injuries, there are likely to be many things running on your mind. Aside from the panic and worrying about the well-being of injured individuals, perhaps one of the concerns at the forefront of your mind is what you can do to help.

For instance, what type of wounds are present, and how can you help manage them? And suppose there’s bleeding present. Is there anything you can do to control and manage the bleeding site? Is there a way to help the patient without making the situation worse? But much like any unfortunate situation, having a calm mind combined with some know-how of things to do during a crisis can help save a life, especially in medical emergencies like bleeding.

In this post, we’ll discuss the types and causes of bleeding, when it is considered an emergency, and what to do to manage blood loss while waiting for medical assistance. Read on to learn more.

Essentially, bleeding can happen due to an injury or wound you sustain or could also be attributed to other medical conditions. It can be either external or internal.

External bleeding is a common occurrence after an injury or trauma. It is more common and can be controlled by applying pressure to the wound or securing the wound with windlass rods tourniquet. External bleeding can range from minor to severe, depending on the extent of your injury. For example, for light scratches or scrapes, less bleeding can be expected compared to major injuries like puncture wounds. While bleeding is an expected result of an injury, excessive bleeding is a medical concern. In such a case, seek immediate medical assistance.

On the other hand, internal bleeding or hemorrhaging is more difficult to diagnose and control. It also requires a medical professional’s intervention. Internal blood loss can happen when you suffer a traumatic injury that ruptures the blood vessels inside the body. It can happen anywhere in the body, like the stomach, intestines, and brain. And in some cases, internal bleeding can also be due to bleeding disorders.

As mentioned, while bleeding is an expected result of an injury, some instances of bleeding can also be due to medical conditions and the intake of certain medications.

Traumatic bleeding is one of the most common causes of bleeding. It can be due to external damage or cuts to the body, such as a wound, injury, or surgery. Here are some injuries related to traumatic bleeding:

Bleeding disorders refer to medical conditions wherein a person’s system is having difficulty in the blood clotting process. An individual who has such disorders can be prone to bruise easily and experience excessive bleeding when they get injured.
Some of the medical conditions that may cause bleeding include:

Bleeding from this source will often occur internally and only be detected through imaging techniques like CT scans, MRIs, or other diagnostic tools and tests.

Certain medications can also increase the risk of bleeding. Blood thinners, for instance, are commonly used and prescribed to aid in blood clots and help treat other medical conditions that affect blood vessels and the heart. Other medications also include some NSAIDs like aspirin.

Ideally, when prescribing such medications, your healthcare provider will warn you against possible risks and side effects. They’ll also advise what food and drinks to limit or avoid to not interfere with this prescription. They’ll also explain what to expect and what to do in case of severe signs of bleeding.

When Is Bleeding Considered An Emergency

Bleeding is a sign of an emergency when it is heavy, spontaneous, and can’t be controlled. A person with the following symptoms should seek medical assistance or be brought to the hospital immediately.

Managing Blood Loss During An Emergency 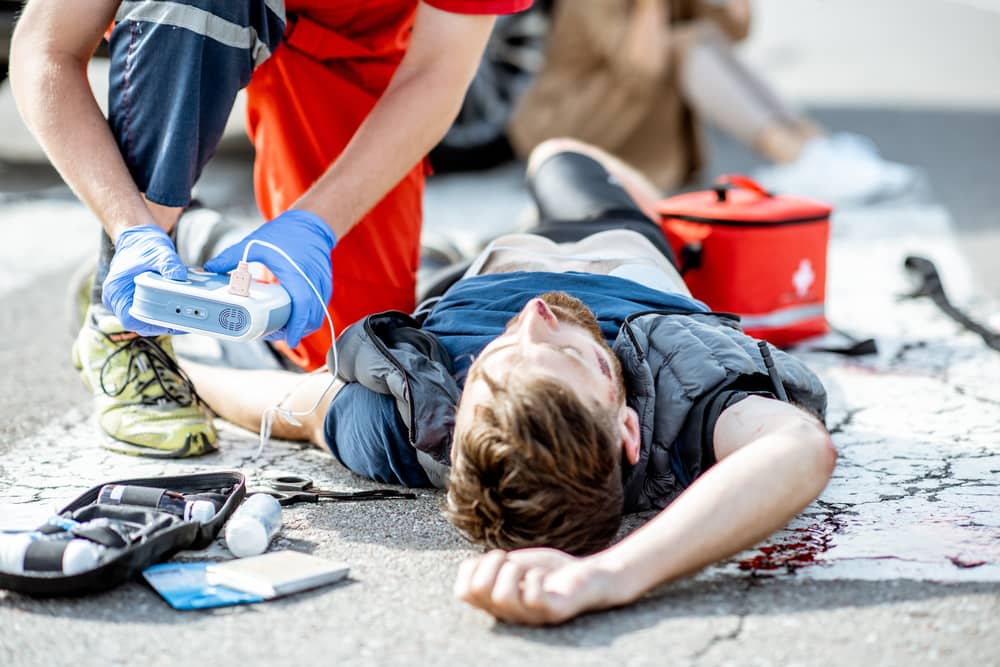 Ideally, if a person sustains an injury that has resulted in heavy bleeding, you should take them to see a healthcare provider as soon as possible. The longer someone bleeds, the higher the risk of more damage, which can even be fatal. The injured person could suffer hypovolemic shock, wherein the body shuts down due to losing so much blood.

But as a family member or a bystander, there are some things you can do to help manage the situation while waiting for medical help to arrive. There are first aid treatments you can apply to control and limit blood loss in such an emergency.

1. Identify The Location Of The Wound

One of the first things you need to do to stop bleeding is to locate the bleeding site. If possible, remove or cut the person’s clothing to see the source of bleeding. This will allow you to attend to the wound better. However, it’s critical to keep in mind that attempting to remove any embedded foreign object in the wound is not advisable, as doing so can cause more harm and can result in uncontrolled bleeding.

Furthermore, identifying the location of the bleeding site could also allow you to take the necessary measures to control it. For instance, if the injury is on the leg or arm, you can elevate (above the level of the heart) it to slow blood flow to the affected area. Alternatively, you can apply a compression bandage to halt blood flow in the affected limb.

2. Apply Firm Pressure To The Wound

The next thing you should do to control bleeding effectively is to apply firm pressure to the wound. This can help slow down the blood flow, giving you enough time to get the person to the nearest hospital.

You can use a sterile bandage, a clean cloth, or a towel or handkerchief to apply firm and steady pressure to the patient’s wound. If you can’t find anything you can use around you, you can use your hands, provided it’s clean and sanitized. However, it’s critical to note using your bare hands to apply pressure on the wound should be the last resort since you can risk contracting infections if you have an open wound and come in contact with infected blood.

Apply continuous pressure until bleeding subsides or slows down. However, applying pressure on the bleeding site could cause pain and discomfort to the injured individual. Hence, it’s good if you can talk to them while doing the procedure to assure them and explain why pressure can help control their bleeding.

You could also use gauze or a bandage to wrap around the wound site to maintain firm pressure. If the bleeding slows down, add dressing to the wound to keep out dirt and other contaminants that may infect the bleeding site and still hold the pressure. If blood continues to seep through the bandage or gauze, avoid removing or replacing them. Instead, simply add another layer of pads and dressing and continue applying firm pressure until help arrives.

4. Keep The Person Still And Calm

If the patient is conscious, they’re likely to feel anxious. The best thing you can do in such a case is to speak to them calmly about being still and remaining as calm as possible. The more they are in a panicking state, the higher the chance their blood pressure and heart rate will increase, which can only worsen the bleeding.

If possible, lay the injured individual down. Doing so can help prevent them from fainting or falling, especially since bleeding can cause a person to feel light-headed and dizzy. And in some cases, a person who sustained severe injury and bleeding could also experience confusion or disorientation.

In addition, keeping the injured person still and calm allows you to immobilize the bleeding site or wound. This can be a critical step not just to mitigate blood loss but also if the patient has other injuries like fractured bones.

Medical emergencies like injuries can happen anytime and anywhere. And depending on the severity of the case, some wounds can cause profuse bleeding, which can be fatal when not attended to immediately. And so, one of the best ways to be prepared for such an unfortunate instance is by knowing what you can do. After all, any effort can go a long way in helping save a life.

While seeking professional help is the best approach to attend to and treat a bleeding injury, there are things you can do while waiting for medical professionals to arrive. The above insights can be a good start to guide you on what to do to control and manage bleeding in emergency situations.